Hong Kong society has long adhered to the racial hierarchy practiced in the colonial period, with white people treated better than South Asians and Africans in everyday interactions. In response to this, anthropology researchers have carried out long-term ethnographic fieldwork on these communities and provided a more nuanced understanding of migrant issues. 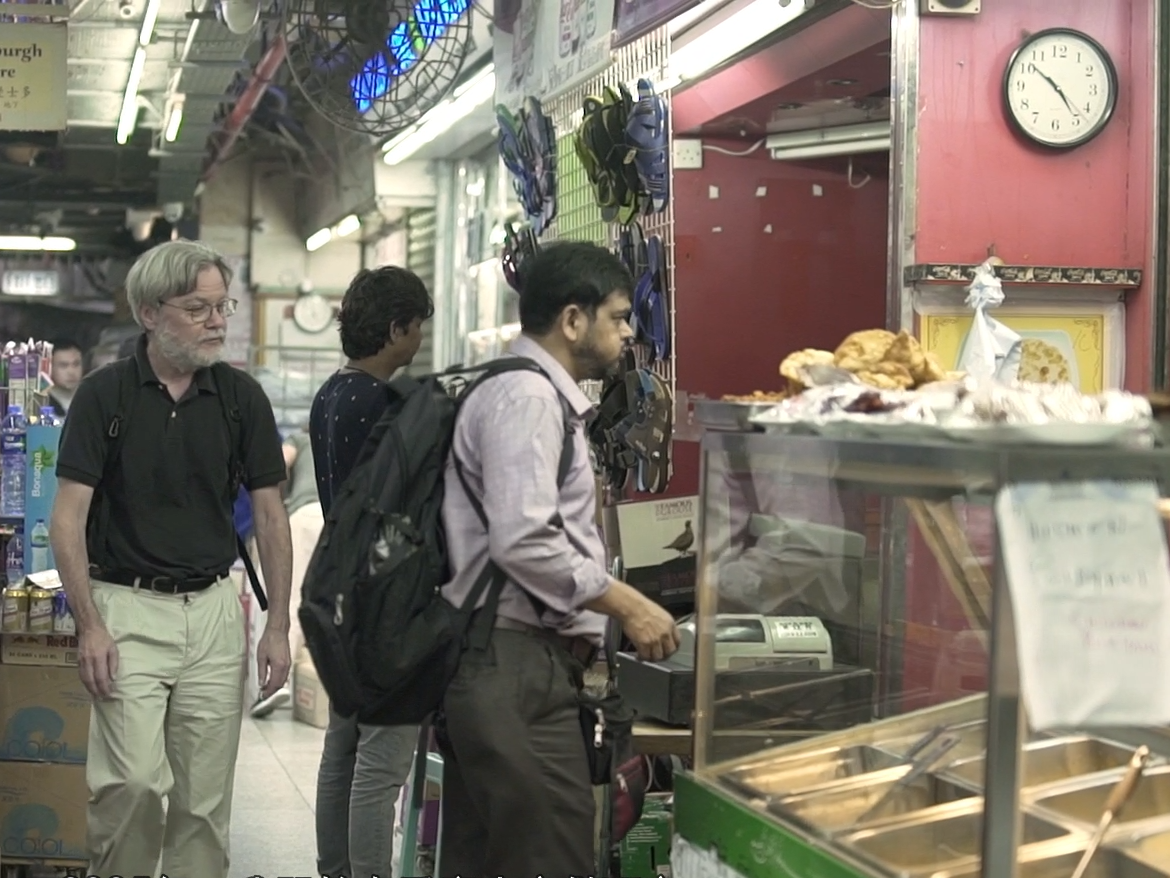 With the support of an RGC grant (GRF project no. 448807) beginning in 2005, Gordon Mathews spent several days a week over four years living in Chungking Mansions, a developing-world center in Hong Kong, to interview its residents. The research explored how low-end globalization worked, involving an examination of the lives of African and South Asian traders, merchants, and asylum seekers. The research focused not only on their economic preoccupations, the primary reason for their being in Hong Kong, but also took issue with their hopes, fears, religious beliefs, and romantic lives to understand how they were changing Hong Kong and vice versa. His research has transformed the negative image of Africans and South Asians in Hong Kong.

Gordon’s widely acclaimed book Ghetto at the Center of the World, sold 9,000 copies in English and 27,000 copies in Chinese and received two book awards for the work. An open-access audiobook was also made available in Cantonese, along with a series of articles. These efforts changed the understandings of ethnic minorities and asylum seekers by stakeholders at multiple levels, affecting local and international media, legislative councillors, and NGOs.

Gordon was the first scholar to point out the importance of South Asians and Africans in Chungking Mansions to the low-end globalization which connected China to the developing world. His work was featured in key international publications like CNN, CNBC, BBC, The Economist, and Time Magazine from 2007 to 2011. Based on this work, Time Magazine referred to Chungking Mansions as the “Best Example of Globalization in Action”, and legislator Joseph Lee, at a legislative council meeting in November 2013, cited Gordon’s findings in Time magazine – “people of 120 nationalities have lived in Chungking Mansions” – to prompt the government to maintain the international orientation of the city by addressing the health-related needs of ethnic minorities.A motion on “Formulating a Medical Policy to Support Ethnic Minority Elderly People” was passed at the meeting, resulting in improved accessibility for ethnic minorities to the public healthcare system. These improvements include the provision of interpretation services for patients as well as cultural training for healthcare personnel.

Gordon has pointed out to many public audiences the difficult situation faced by asylum seekers in Hong Kong. In July 2013, legislator Fernando Cheung cited a report on Gordon’s work presented on CNN to request the Panel on Welfare Services of the Legislative Council to hold a special meeting with NGOs serving asylum seekers to discuss “ways to improve the situation of refugees, torture claimants and asylum seekers in Hong Kong.” This report adhered to Gordon’s analysis of the situation of asylum seekers and stated, “with no way to join society and no way to return home, these survivors languish in miserable situations…” A special meeting was held on 13 January 2014, and one month after the meeting, the administration agreed to increase the level of social benefits to asylum seekers by an average of 20% on rent, transportation allowance, and food provisions. Through extensive media coverage, Gordon’s work has informed policy formulations concerning ethnic minorities and asylum seekers. Additionally, in the course of his research and teaching of a weekly class for asylum seekers, he has helped some asylum seekers to attain refugee status overseas. 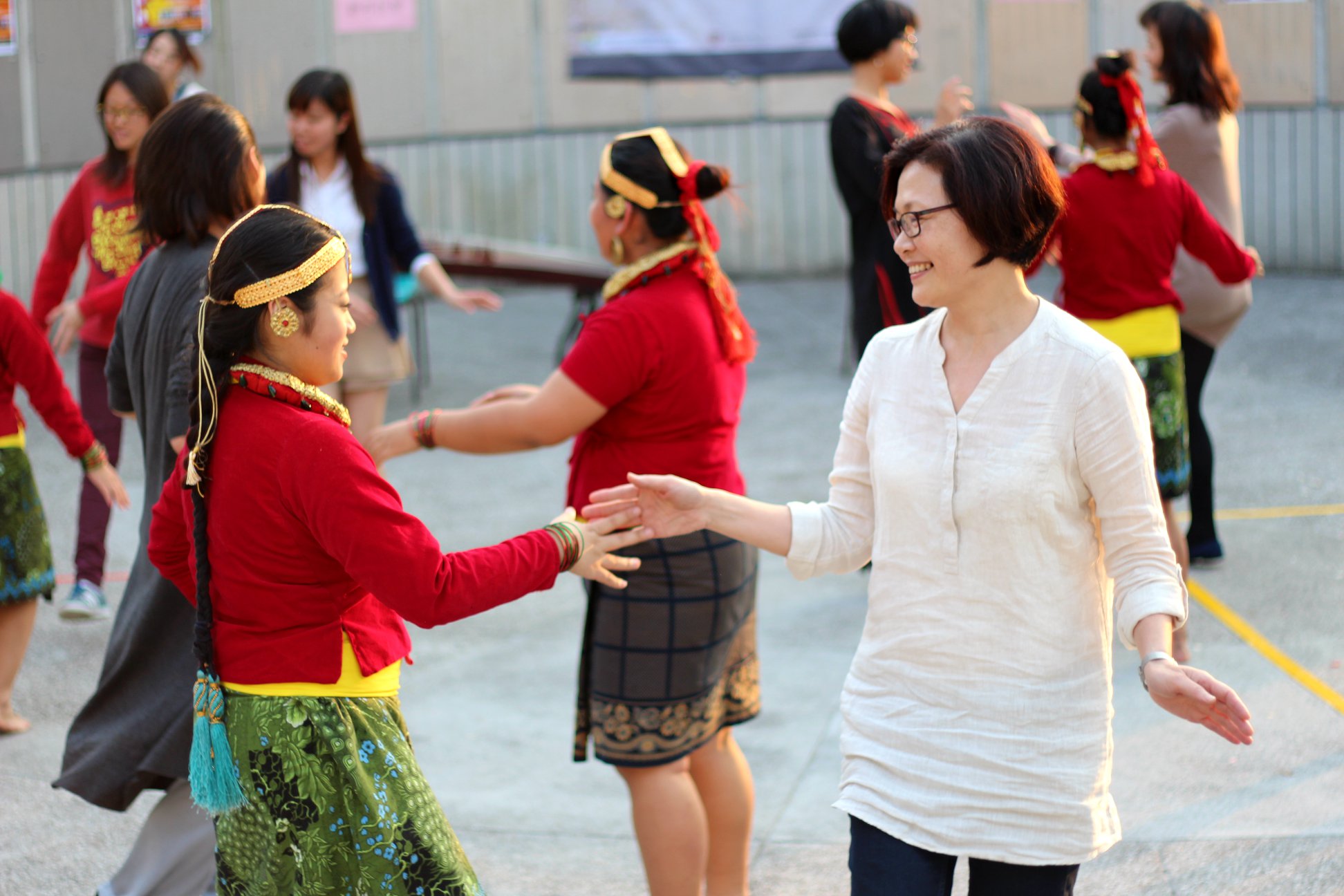 Maria Tam’s research (2013-19) was funded by the University’s Knowledge Transfer Project Fund (KPF) and Equal Opportunities Commission (EOC) grants and involved the study of the living experiences and cultures of South Asian communities in Hong Kong, namely, the Indian, Nepali, Pakistani, Sri Lankan, and Bangladeshi communities. A study on intercultural work among women’s communities and in neighborhoods was also undertaken. Additionally, Maria’s research assessed the public’s cross-cultural sensibilities and examined how intercultural experiences could enhance their cultural competencies. The research paid special attention to the circumstances of South Asian female homemakers since women often play the role of change agents on the levels of family, neighborhood, and society in general. Her research has shed light on the importance of intercultural education as well as the pathways to developing intercultural competency.

Maria received grants from KPF and EOC to launch her “Multiculturalism in Action” (MIA) projects, involving her research on South Asian communities in Hong Kong. In contrast to the assimilative policy adopted by the government towards ethnic minorities, her projects aim at enhancing intercultural competency among young people using a train-the-trainers model. Participants were first introduced to the concept of interculturalism (e.g. partnership and mutual empowerment) in training workshops and then facilitated to run their neighborhood innovation projects in schools and communities.

MIA has developed a series of training materials: four booklets on different ethnic minority groups (with a total of 3,000 copies given out), two publications for general readers (i.e. What are We Celebrating: Multicultural Festivals in Hong Kong with 1,600 copies sold and The ICONIC Mums Kitchen: Taste of Intercultural Hong Kong with 800 copies given out), two documentary films (Feeling South Asian and Intercultural Mums Classroom with more than 1,000 hits online), and other online resources (the MIA website with 4,000+ hits). The end-users include educators, civil servants, NGOs, and businesspeople.

Between 2013 and 2019, over 120 individuals from various ethnic backgrounds were trained as cultural trainers. They subsequently proceeded to make presentations in schools and communities. Over 13,000 members of the public, including teachers and students, have participated in these activities, including training workshops and outreach activities. Feedback has been collected after conducting these intercultural activities. Post-event surveys show that more than 75% of secondary school students (n=1,305) found their intercultural competency improved by the outreach activities. Among workers in the public sector, 43 inspectors and superintendents in the Police Force attended the intercultural training workshops, and the surveys showed that nearly 90% of the participants from the Police Force (n=43) felt that their intercultural competency had improved. The facilitator of the workshop at the Police College commented, “after getting a better understanding of Hong Kong ethnic minorities, the participants will bring the knowledge back to their workplace.”

Furthermore, one of the community projects concerning the South Asian sport kabaddi received a Social Innovation and Entrepreneurship Development Fund for HK$100,000 in 2018. The project is called Kabaddi United Hong Kong (KUHK). It has been developed as a social enterprise with the aim of promoting ethnic integration through kabaddi in Hong Kong. With the advice and assistance of MIA, KUHK has run kabaddi programs in more than 50 schools and communities with a total of 2,500 participants from 2014-19. KUHK has employed one full-time staff and more than 20 part-time staff, many of whom are ethnic minorities. The founders of KUHK said, “the research of MIA has formulated three values which are particularly important in intercultural projects … We have adopted these values in our project and formed a strong intercultural team… The research of MIA has designed a ready-to-use teaching kit to teach intercultural competency and this kit is adaptable for different users… This has significantly widened the scope of our service”. 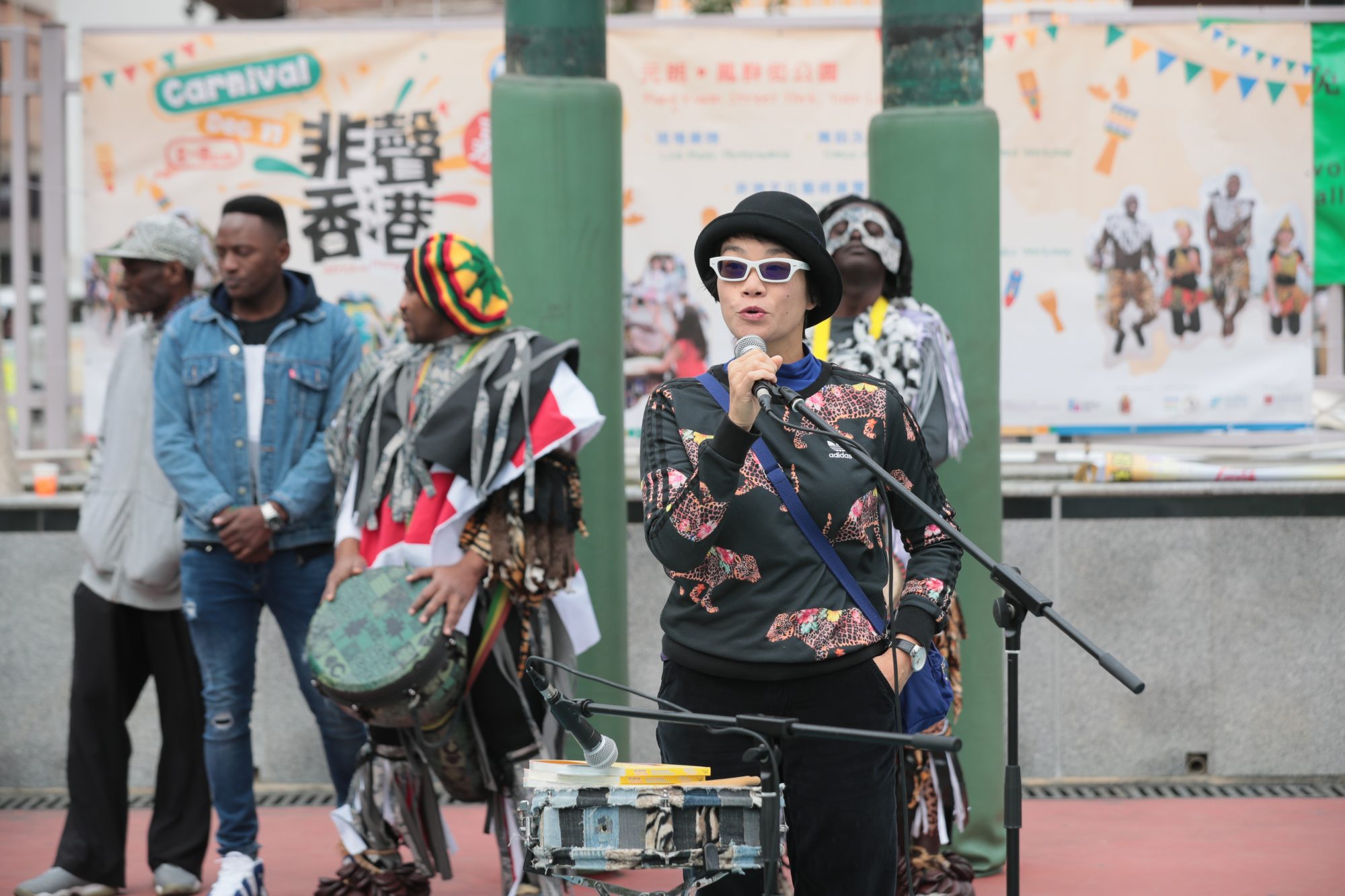 Sealing and her team received grants from the AIDS Trust Fund to research the health practices, problems, and needs of asylum seekers, refugees, and torture-claimants (ASRs) from Africa in Hong Kong. In 2014, the report was used by the judiciary in an Expert Report for a case at the Eastern Magistrate’s Court (Case ESCC 1139/2014) in support of a torture claimant being prosecuted for unlawful employment.

In 2017-18, Sealing received a grant from the Robert H. N. Ho Foundation fund to develop cultural workshops on Africa in Hong Kong for university students and to collaborate with NGOs to conduct community outreach activities for secondary school students and the public. The activities were well received, with 29 students attending the workshops and more than 600 participants attending the community events. The participants particularly appreciated the intercultural collaboration. One participant who played the role of cultural trainer to secondary school students said, “Through this outreach [to a secondary school], I felt like the students were coming out of their shells and enjoying learning African drumming and dancing. The fun and sincerity that I see in the students, African mentors, and myself was rewarding”.

Sealing’s research has also resulted in herself playing a pivotal role in setting up a band called “Talent Displaced” in 2016, with members including African ASRs. The band plays a variety of music genres, including hip-hop, rap, and African drums. With her assistance, the band had the opportunity to perform about one show a month at bars, universities, music festivals, and government-sponsored events. This has helped improve the social and cultural well-being of band members. One band member said, “[CHENG] uncovered our music talents…[and] introduced our music to the public. We have got opportunities to perform our music…and shared the message of love and harmony with the audience. Major newspapers in Hong Kong have covered our stories. This has changed the public perception of asylum seekers”. 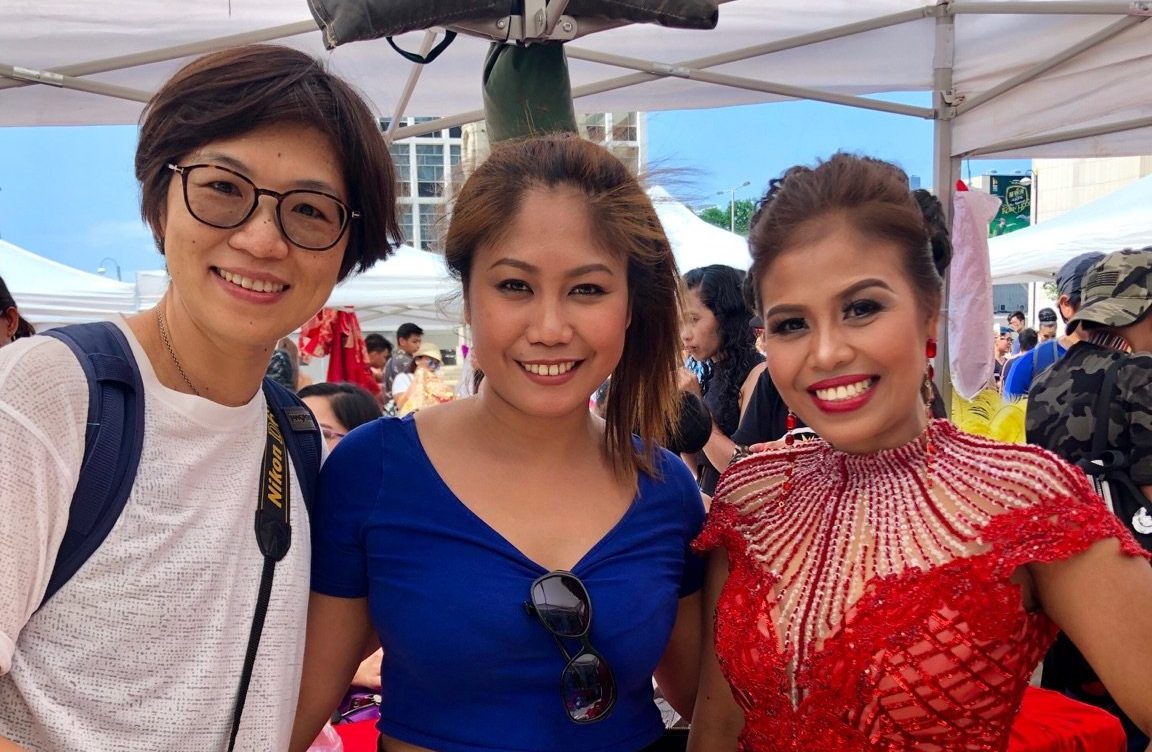 Chen Ju-chen’s research highlights the indispensable role that Filipina domestic workers play in maintaining Hong Kong society. Her research has thrown light on the lives of these workers, whose critical contributions to Hong Kong society are typically taken for granted. The labour they perform overwhelmingly takes place in the private domain of Hong Kong households, so their work largely remains hidden from public view. Yet the value of their labour contributions is without question, for household reproduction is the necessary condition for formal economic production. Functioning households are imperative for the operation of national economies. Indeed, it is the contributions of foreign domestic workers to the city’s households that their employers, in turn, can participate fully in the formal monetary economy. It is in this literal sense of labouring to reproduce the necessary conditions of what seems normal in Hong Kong that domestic workers can be considered under-labourers of Hong Kong’s economy.

In her research on Filipina beauty pageants that take place on their day-off on Sundays, Ju-chen reveals Filipina domestic workers to be no different from the rest of the city’s population. Like all workers, they need time and space for rest, re-creation, recognition, and dignity. Ju-chen’s research has sought to make Hong Kongers more aware of the life-situation of domestic workers in Hong Kong. It has also brought about the Hong Kong public’s recognition of them as deserving members of Hong Kong society. 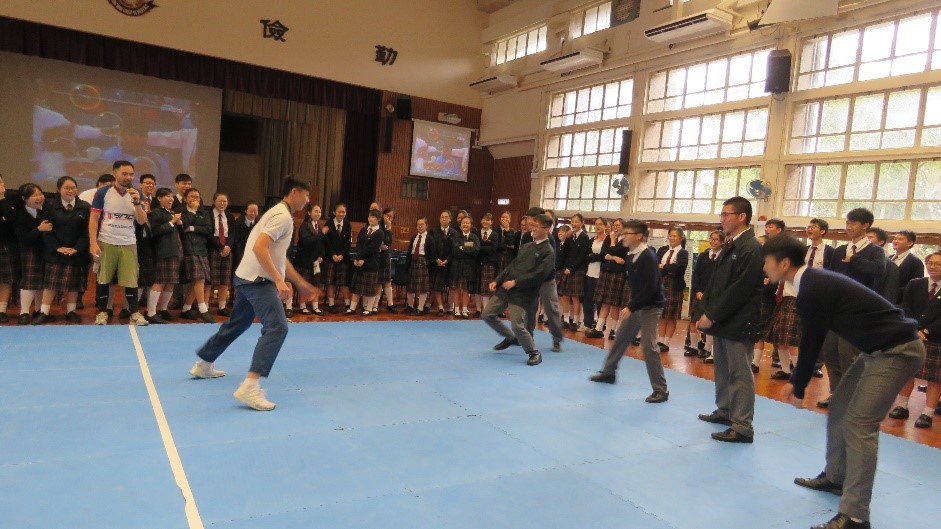 Tang Wai-man’s academic research has focused on the conditions of South Asian communities in Hong Kong. This began with his PhD dissertation project on drug-use among Nepali youth, specifically, on the relationship between heroin-use and second and third-generation Nepalis in Hong Kong.

Wai-man was subsequently involved in the Multiculturalism in Action (MIA) project, which was funded by the University’s Knowledge Transfer Project Fund (KPF) and Equal Opportunities Commission grants and led by Maria Tam (https://www.arts.cuhk.edu.hk/~ant/about/social-impact/). Wai-man contributed to the study of the living conditions of South Asian communities in Hong Kong and the publication of the following cultural-competency training materials: four booklets on different ethnic minority groups (with a total of 3,000 copies given out) and other online resources (the MIA website with 4,000+ hits). Educators, civil servants, NGOs, and businesspeople were among the end-users of these materials.

Wai-man’s current research is concerned with the South Asian sport of kabbadi, an interest that began shortly after he completed his PhD studies. His research focuses on two elements: (i) the cultural politics involved in the growth of kabbadi around the world, and (ii) the deployment of kabbadi as a means for inter-cultural education in Hong Kong. For the latter purpose, Wai-man teaches kabbadi in Hong Kong’s secondary schools as well as in the community. He has recently received the CUHK’s Direct Grant (Project code: 143959537) to study the intercultural impact of kabbadi in the physical education curriculum of Hong Kong’s secondary schools.