Does the World Need Anthropology? -- A Collage

“Is anthropology’s role simply to provide ethnographic illustrations, or is it to provide conceptual tools to analyze the world as a whole?” (Mathews 2019: 174).

“In an age of globalisation, does anthropology have its own message to tell the world, using its own perspective to explain the world? . . . It seems that we no longer can clearly say” (Mathews 2019: 182).

“Only relatively recently has China’s mode of globalization changed. . . . The older, hybrid Chinese cuisines that are a true token of centuries of globalization might gradually disappear, only to be replaced by ‘genuine’ Chinese cuisines that, ironically, are pretty much the same the world over. The cosmopolitan elites might have much more choice of authentic and high-quality foods, but that choice will be the same wherever they go” (Cheung 2021: 89).

“As a critical indicator of Khmer imperial expansion, roof tiles are an excellent entry point for understanding the extent to which the Khmer made decisions to embrace new ceramic manufacturing technologies” (Wong et al. 2021: 130). “Their most obvious emulation of Chinese elements was in adopting a ranking system for roof tiles in order to demonstrate their centralized political and religious power in the region” (Wong et al. 2021: 150).

“The closer you look, the harder it is to delineate local from global, slow from fast, alternative from mainstream, or artisanal from industrial” (Khalikova 2020: 188). “How can we write about a plurality of traditions, if traditions are themselves plural?” (Khalikova 2021: 3). 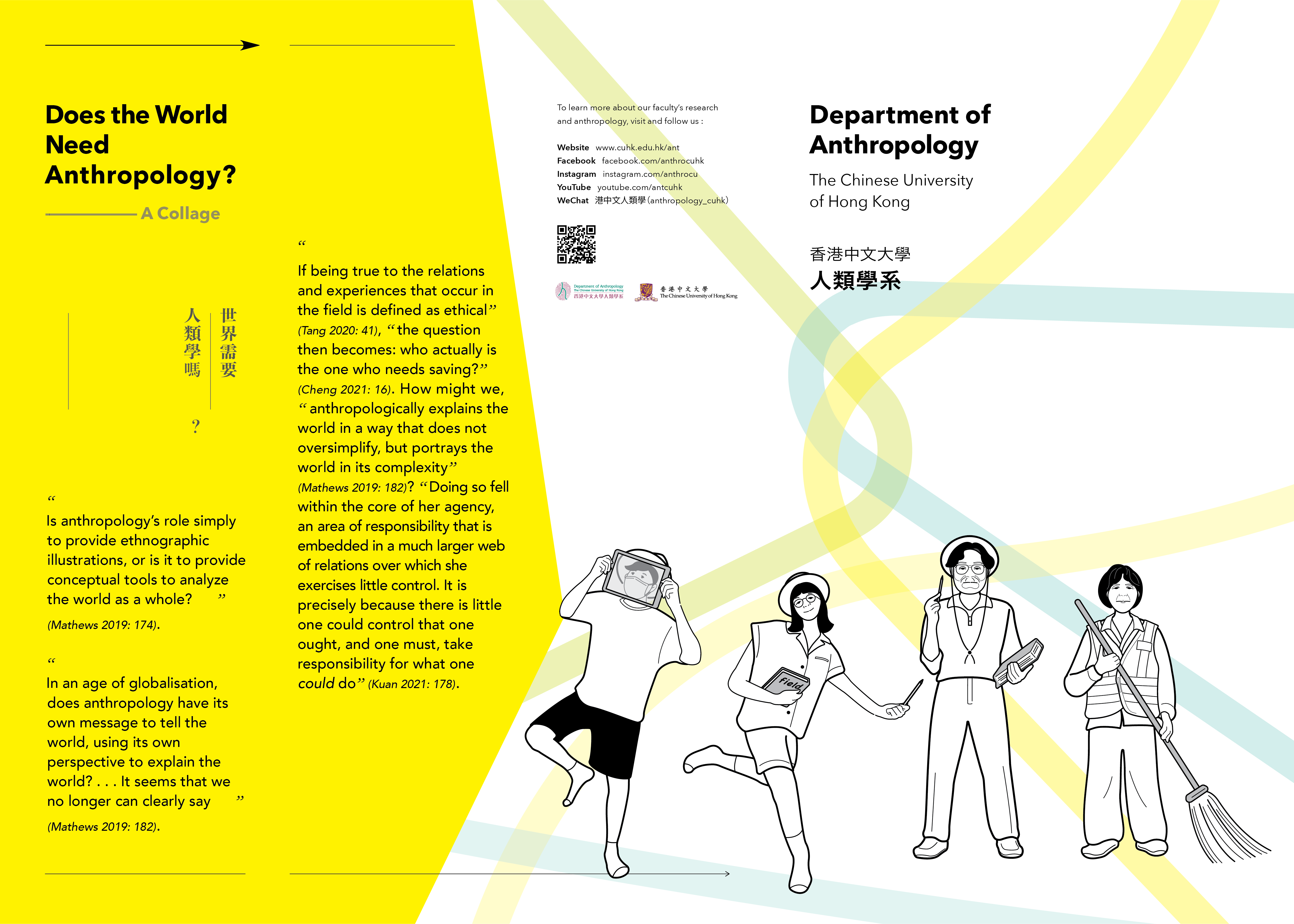 “How was it possible that one’s humanity is hierarchised according to, if not premised entirely on, one’s victimhood and not one’s assertion of rights?” (Cheng 2021: 5). “In social anthropology we learn to understand seemingly unreasonable behavior as symbolic behavior that says something to someone about something” (Kuan 2021: 169).

“In South Korea, the trope of women’s sexual victimhood – embodied by the Prostitute – constitutes both a vicarious trauma for imagining the nation, but also a site for its redemption and rebirth” (Cheng 2021: 8). “Being a mobilising ‘collective fantasy’” (Cheng 2021: 16), “sex workers further come to bear the historical and political burden of righting all that is wrong with the nation, making their elimination essential for the nation’s rescue” (Cheng 2021: 3).

“Drug studies in South Asia have often described women drug users as victims and preyed upon by other people . . . . This may be true for some cases, especially those who are the most vulnerable. Yet . . . many women drug users are able to manipulate resources in different situations to negotiate power relations” (Tang 2020: 39).

“Active participation in beauty pageants is a process of life- and self-making: by the act of joining a group, sacrificing one’s time, and making contributions of one’s talent and money, a Filipino migrant woman defines who she is as a desiring agent in migration” (Chen 2015: 62). “’Why not rest on your rest-day’ . . . is uttered from the perspectives of employers . . . Sundays have become the ‘rest’ day – the day designated to ‘restore’ their energy for the following week’s labour” (Chen 2015: 62).

“The psychoboom . . . is simultaneously the creation of a new profession and the dissemination of ideas, values, and sensibilities derived from psychotherapy or psychology in general to ordinary people” (Huang 2018: 394). “Anticipation of state regulation prompted fears and discontents as well as critical reflections and actions that aimed to transform the field into a profession” (Huang 2018: 371). “Jianghu [江湖], imagined as a world in which one could explore a multiplicity of interests and pursuits, was envisioned as an alternative ideal at which the local development had excelled” (Huang 2018: 393).

“The structuring principles of ancient markets, forces driving change in market systems, and underlying mechanisms of administrative control over the movement of material culture can all be explored in the context of ancient China” (Lam 2020: 117). “The comparison of distribution patterns of iron and bronze objects from tombs of commoners of moderate social status are seen to provide a significant and meaningful measurement of market integration in early Imperial China” (Lam 2020: 142). “Studying the degree of integration . . . should make it possible to clarify how ancient markets served to integrate cities with county and village towns and thereby provide a practical approach for articulating the economic structure of early empires” (Lam 2020: 120).

“Locality, nationality, and globality are not objective, measurable realities but are negotiated and co-produced markers, where the manufacturing of locality is itself a global phenomenon” (Khalikova 2020: 188). 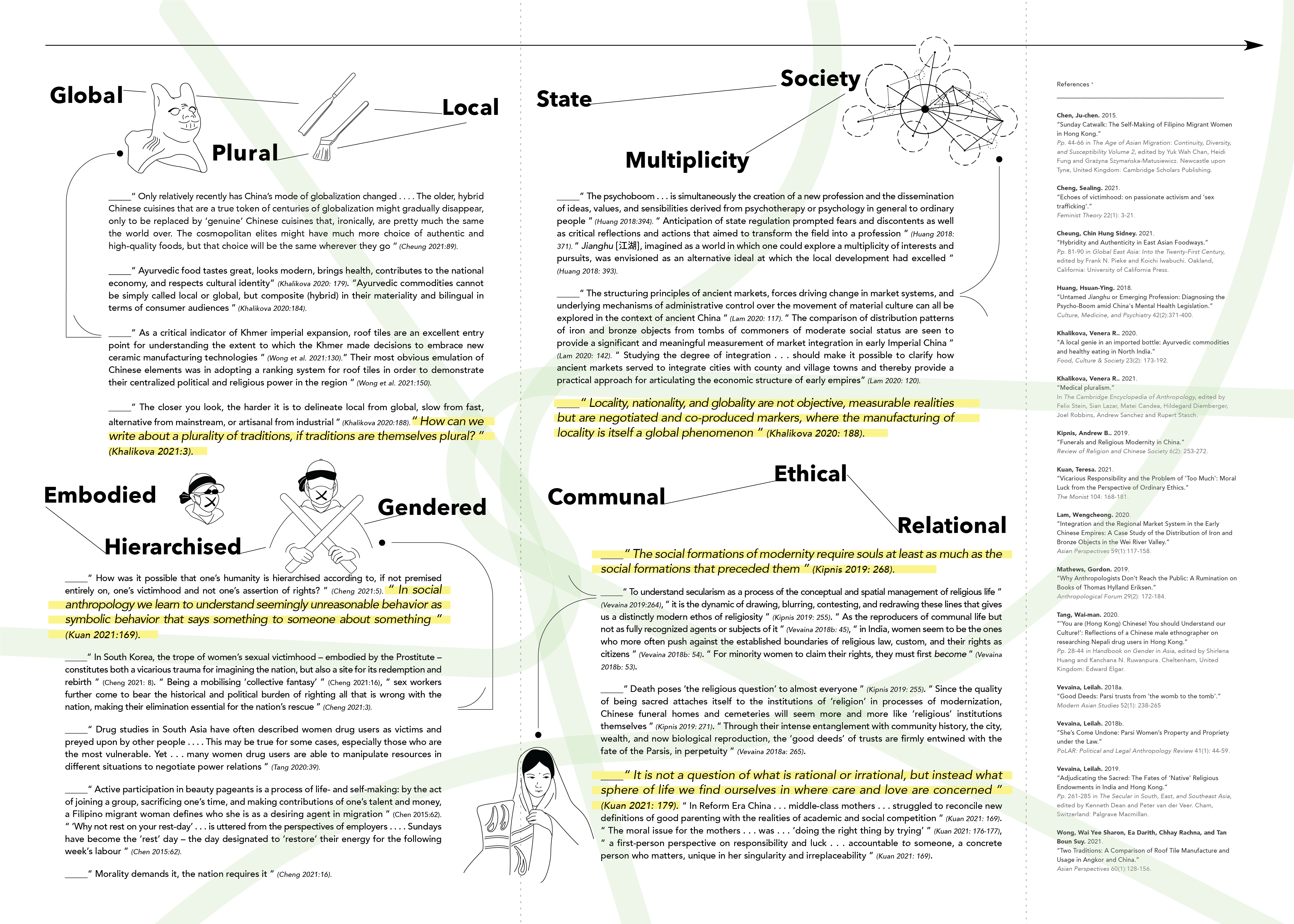 “To understand secularism as a process of the conceptual and spatial management of religious life” (Vevaina 2019:264), “it is the dynamic of drawing, blurring, contesting, and redrawing these lines that gives us a distinctly modern ethos of religiosity” (Kipnis 2019: 255). “As the reproducers of communal life but not as fully recognized agents or subjects of it” (Vevaina 2018b: 45), “in India, women seem to be the ones who more often push against the established boundaries of religious law, custom, and their rights as citizens” (Vevaina 2018b: 54). “For minority women to claim their rights, they must first become” (Vevaina 2018b: 53).

“Death poses ‘the religious question’ to almost everyone” (Kipnis 2019: 255). “Since the quality of being sacred attaches itself to the institutions of ‘religion’ in processes of modernization, Chinese funeral homes and cemeteries will seem more and more like ‘religious’ institutions themselves” (Kipnis 2019: 271). “Through their intense entanglement with community history, the city, wealth, and now biological reproduction, the ‘good deeds’ of trusts are firmly entwined with the fate of the Parsis, in perpetuity” (Vevaina 2018a: 265).

“It is not a question of what is rational or irrational, but instead what sphere of life we find ourselves in where care and love are concerned” (Kuan 2021: 179). “In Reform Era China . . . middle-class mothers . . . struggled to reconcile new definitions of good parenting with the realities of academic and social competition” (Kuan 2021: 169). “The moral issue for the mothers . . . was . . . ‘doing the right thing by trying’” (Kuan 2021: 176-177), “a first-person perspective on responsibility and luck . . . accountable to someone, a concrete person who matters, unique in her singularity and irreplaceability” (Kuan 2021: 169).

“If being true to the relations and experiences that occur in the field is defined as ethical” (Tang 2020: 41), “the question then becomes: who actually is the one who needs saving?” (Cheng 2021: 16). How might we, “anthropologically explains the world in a way that does not oversimplify, but portrays the world in its complexity” (Mathews 2019: 182)? “Doing so fell within the core of her agency, an area of responsibility that is embedded in a much larger web of relations over which she exercises little control. It is precisely because there is little one could control that one ought, and one must, take responsibility for what one could do” (Kuan 2021: 178).

Lam, Wengcheong. 2020. “Integration and the Regional Market System in the Early Chinese Empires: A Case Study of the Distribution of Iron and Bronze Objects in the Wei River Valley.” Asian Perspectives 59(1):117-158.

Tang, Wai-man. 2020. “‘You are (Hong Kong) Chinese! You should Understand our Culture!’: Reflections of a Chinese male ethnographer on researching Nepali drug users in Hong Kong.” Pp. 28-44 in Handbook on Gender in Asia, edited by Shirlena Huang and Kanchana N. Ruwanpura. Cheltenham, United Kingdom: Edward Elgar.

To learn more about our faculty’s research and anthropology, visit and follow us: